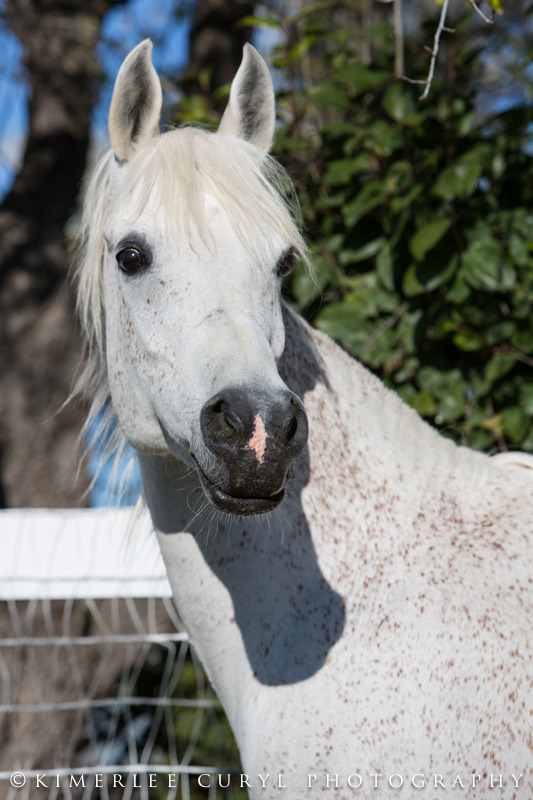 2014; Starlight gave us a chestnut colt, very elegant as you would expect a Symbolic foal to be with nice tight ears, bug eyes and on a chestnut this is amazing. His nickname is "Hotrod" because he zooms around the pasture, cruising the other foals and even their dams. The other mares are fairly tolerant of him but he does pester all the foals. We love this colt and believe that he is definitley stallion quality.

Starlight is a wonderful mare! We feel extremely blessed to have this Ansata Osiron daughter at our farm. She traces to the mare, Ansata Nile Queen on the tail female side of her pedigree (bottom line). Queen and her full sister, Ansata Nile Mist, founded dynasties in the Arabian Gulf region. Even though the branch of her family is Bint Bint Sabbah it came through Sabah rather than Sabrah whom the Glorietasayonaara family branch traces through.

Henry and I traveled to Ansata in 2005 with the idea of purchasing three mares and a colt. As Judi and I walked the pastures we looked at the mares and fillies by ages. In the two year old pasture were many lovely youngsters. Starlight came up to me immediately and of course I asked who is this filly? Judi answered, yet encouraged me to look at others since she was from a similar family to one we already have at SMF. However, over the three days we were there, this filly would either have her head in my back when I was in that pasture or watch me over the fence while I was in an adjoining pasture. Finally, I said to Judi, "we have to take her home". Sometimes, they choose us and we are smart enough  to know it at that moment. I am so glad we recognized that moment.

Starlight has given us three colts and a filly by Majestic Noble SMF, her name is Noor El Nil. The 2014 foal by Symbolic SMF is a chestnut colt that we named Shahin El Nil SMF, he is amazing and we are thrilled with this cross. Love, love this mare.

Henry like the "snort button" on Starlight, as he calls it. Some horses when they are being presented will stop to blow and snort. Starlight has a major snort button when she is presented......she loves an appreciative crowd!! And before all of you Ansata prefix hunters call to ask, "NO" she is not for sale!!