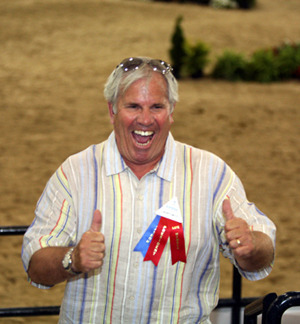 It was another great year in Lexington for Silver Maple Farm!

Christie was delighted to be back at the Event, and her friends were certainly happy to see her there with a smile on her face. The classes were large and of excellent quality, so we are quite proud that all eight of the Silver Maple Farm horses were Top Ten or better this year!!

The Ali Saroukh get just kept on winning at the 2007 Egyptian Event! Pictured is Fire Queen SMF, Champion World Class Fillies 1 Year Old. She continued the winning tradition of her dam, Shaia, who was an Egyptian Event Supreme Champion mare, and was also shown by Mike Neal .

As usual, Henry didn't just stay on the sidelines, but got in the ring and showed his winning style!

A special thanks to trainers Mike Neal and Rhodri Jonesand their grooms and assistants. Fantastic job, guys!

The Ladies of SMF

As for the 2007 Egyptian Event, who will ever forget Gerard Paty, still in his show garb with his number on the back, getting behind the counter and waiting on hungry Event attendees at the infamous Waffle House.  The waitress, who was overwhelmed by too many customers just seemed happy that someone was willing to lend a hand!

See you in Lexington next year!

Special thanks to Darryl Larson and Richard Bryant for the great photos!