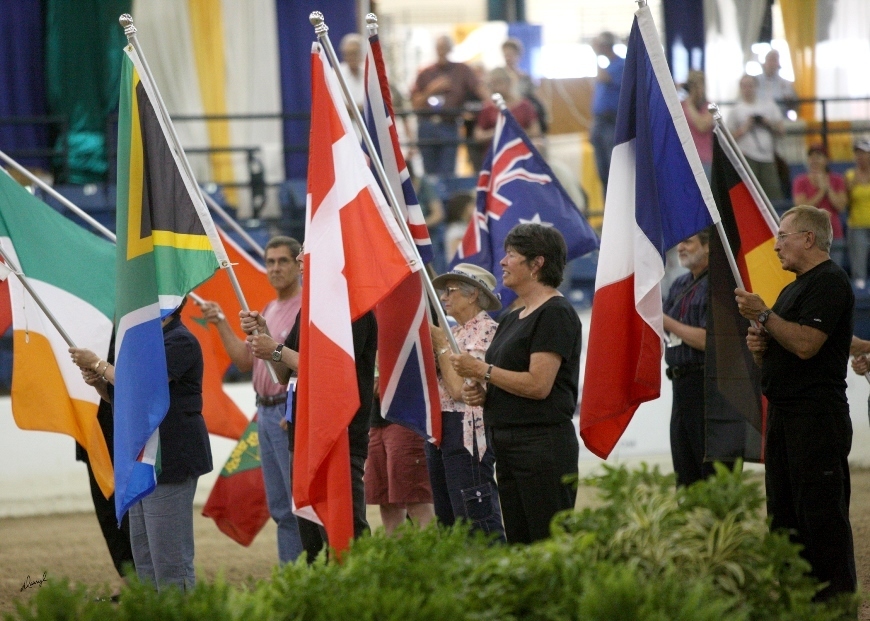 Once a year our farm gears up for the annual trek to Lexington, Kentucky for the Pyramid Society’s Egyptian Event. The Kentucky Horse Park is a truly beautiful and unique setting; owned by the State of Kentucky and dedicated to horses of all breeds. The Pyramid Society, a member’s organization dedicated to the preservation of straight Egyptian blood lines for all Arabian horses holds a show there that is unlike any other show for Arabian horses. It includes an exhibition in hand of breeding stock, showing under saddle plus mini educational seminars. Speakers this year were Dr. John Shelle, Coordinator of Animal Science teaching programs at Michigan State University, Trainer Joe Pollo, Joe Ferris and Anita Enander, Arabian historians, magazine contributors and book authors. The show began Monday June 1, 2009 and ran through the finale on Saturday evening, June 6th.  Most barns decorated the horse stalls with vignettes representing the individual farms and displaying information on their horses.

Above is the SMF stall decor proudly showing the ribbons and garlands won during the week of the Egyptian Event.

Celebrating the 40th Anniversary of the Pyramid Society

One of the very special things about the Egyptian Event is the competition; a vying of friends and “family” as most of the breeders relate through the blood lines of their horses, state or town you live in. This photo is of extended family celebrating one of those victorious times.
(Pictured above from left to right; Manny Vierra of Valley Oak Arabian Farm, Henry Metz, Raymond Mazzei of Furioso Farm,  Bruce Clark of BruMarBa Arabian Stud and breeder of Fire Queen SMF’s dam, Shaia+.  Marion Richmond of Simeon Stud in Australia is standing next to Sigi Constanti then Janina Merz daughter of Sigi Constanti of Om El Arab International with her dog Brody standing next to David Cains of Stonewall Farm and me, Christie Metz. None of us breed the exact same blood lines but we all celebrate the Arabian horse and take advantage of any opportunities to enjoy one another’s company).
Typically the week of the show the weather is very hot and humid so please note the coats on humans and dogs!

She was trained by Mike Neal of Mike Neal Training Center in Delavan, Wisconsin.

Delilah SMF (*Simeon Shai+ x Dance Diva by Raquin RA) a chestnut filly was shown in two classes; She placed 6th in the Straight Egyptian Futurity Yearling Fillies of January 1, 2009 to April 15th, 2009 and was shown to this placing by Rod Jones. In the Egyptian Breeders Challenge with owner, Henry Metz on the lead she placed 6th in a stellar class of fillies.

Hadarah and Delilah nose to nose, reassuring one another as they are pasture mates at home in California.

Family friend Janina Merz of Om El Arab International was kind enough to show one of the yearling fillies for us in the Egyptian Breeder’s Challenge. Janina and Hadarah SMF got along quite well. Janina demonstrated what a great horsewoman she is because she had not touched the filly before coming to Kentucky!!! Henry and I thank her for doing such a splendid job,… even though she beat Henry who showed Delilah SMF!!! Janina was third overall winning a portion of the money in this prestigious class.

There are always special moments that Henry and I experience during the annual Event and one of those was to realize on Finals night that two Silver Maple Farm mares bred by us were in the front line of champions. It was an especially gorgeous group of mares, each one very lovely in her own right and we were thrilled to have Fire Queen SMF (Ali Saroukh x Shaia+) along with Jade Lotus SMF (Ali Saroukh x Imdals Jade) included; both were sired by a stallion that we bred as well. It is a breeder’s dream to see how wonderfully they compare with such a superb group of mares.

J.Lo (as we call her) won the Mares 7 to nine years old class with Mike Neal to earn her spot in the front line of champions during Finals night.  This is a mare with a huge heart that truly loves showing herself off to an appreciative crowd and Mike did a super job presenting her.

Another Egyptian Event has come and gone but we always look forward to seeing all our friends and fellow competitors at the next years Egyptian Event. It will be a very special year (2010) as the Arabian Galleries will be open and the “Gifts from the Desert” art show will be shown during this time at the International Museum of the Horse. See you next year! Inshallah.