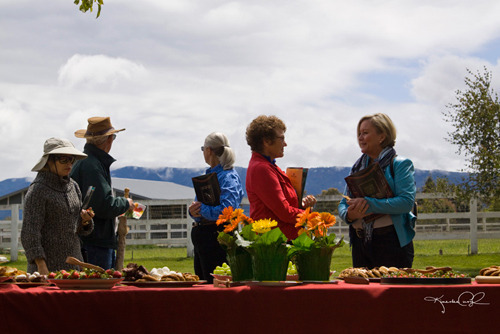 The World Cup Arabian horse show ended in Las Vegas on Sunday April 18th. Many traveled from the show on to the Santa Ynez Valley in California for The Arabian Breeder’s Celebration of Farm Open Houses. On Tuesday April 20th at the midmorning mark the farm tours were kicked off; SMF was happy to be the first in this series. Even though the day began rainy, gray and cold it changed just in time! As the guests arrived the sun began peeking out and was backed by a dramatic sky of racing clouds as storm systems swirled in and out of the valley. In this dramatic setting Christie and Henry Metz, the owners of Silver Maple Farm welcomed everyone and introduced event hosts, Scott Benjamin (Canada) and Anette Mattson (Sweden). For the second year this dynamic duo leant their organizational expertise to the Arabian Breeder’s of the area. After the introductions the horses of SMF were presented in mare family groups by the staff. First the stallions were shown for a reference so that when the mare family groups were displayed the audience would then be able to note their unique contributions. “It is a measurement of the successes and the direction of our breeding program if each succeeding generation is an improvement on the previous one”, Henry commented. Christie and Henry firmly believe the strength of a breeding program is based on the strength and qualities of the mares. The stallion’s characteristics are not meant to overpower the mare but to add to her qualities

Guests at the viewing area.