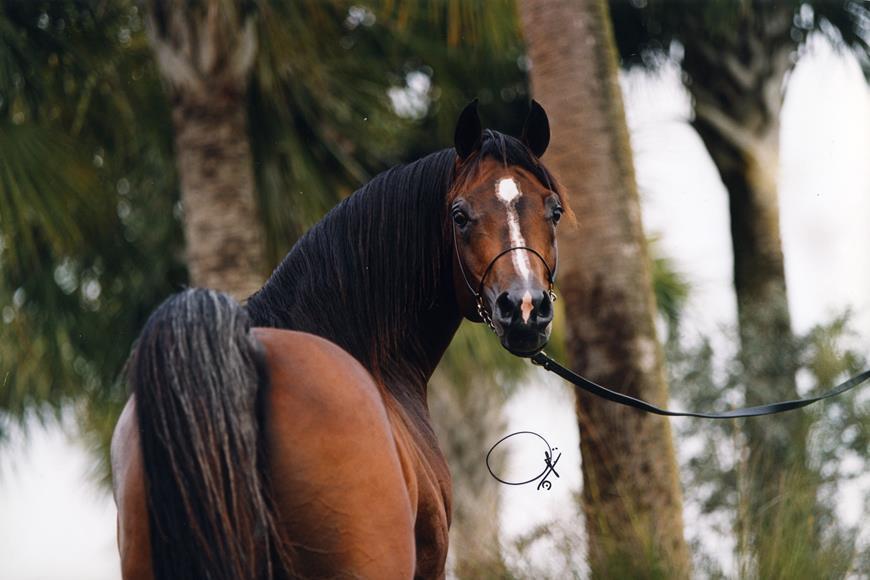 If someone tells you that a horse leapt to the bottom of an abyss without injuring himself, ask what color he was, and if you are told bay, then believe it. The bay says to an argument, "Come no closer!" Arab proverb

“Henry and I saw Renegade for the first time at the 1996 Egyptian Event; he won his two year old colt class, then the Junior Championship and as a two-year old he became Supreme Champion Stallion of the Egyptian Event,” says owner, Christie Metz. “He was an incredible horse; so proud, very beautiful, and the first to win such a prestigious show at the Egyptian Event and at such a young age. We walked up to the Cabrea Farm stall area where he was cared for by trainer, Eileen Verdieck. We both wanted to see this colt up close; he was just as impressive face to face as from the seats in the arena. Then we then went home, but we never stopped thinking about him.

That November  we went to Michigan and visited Bergren Farm. We went to see Renegade again and this time it was with the idea of purchasing him. We both thought he could show on the open AHA circuit. We decided he was a straight Egyptian horse that any Arabian breeder would appreciate for his many obvious qualities. His breeder, Kelly Chenoweth Bergren showed us his dam, her foundation mare, PH Safina, plus photos of the grandsire and grand dam on both sides along with other siblings. Renegade’s antecedents were impressive, but most of all we loved him and his overall harmony. Renegade displayed true classic Arabian type — much like an old Vernet print, or Delacroix or Adam’s paintings. He had a way of tucking his chin to his chest and curving his neck when talking to you. He was definitely one of the most regal animals I have ever been around — he told you he was royalty and you had better acknowledge it!

We miss his presence at the farm but we still celebrate his beauty and are happy to see him reflected in his progeny. It is our plan that we may use Renegade on some of the Saroukh, Noble, Symbolic and Shai daughters. Thankfully, we have frozen semen in order to do this in the future.