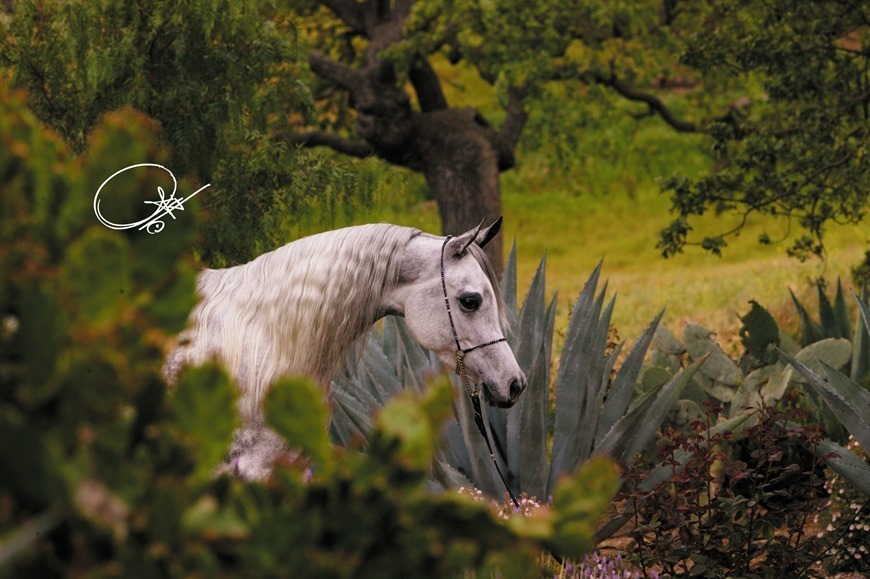 Knowledge for a brighter future can often be found in the wisdom of the past, and the art of breeding Arabian horses is no exception.  In an interesting manuscript written by Ali Ibn Abdulrahman Al Andalusi in 14 th century Spain , the author relates many sayings of the Prophet Muhammad (pbuh) concerning the Arabian horse.  The advice which was given seems to transcend the centuries, for when the Prophet was asked by one of his followers, “What possession is good?” the prophet replied, “A mare which produces many foals.”  When another of his followers responded, “Oh Prophet!  I do have mares,” he was advised to “Keep them and breed them to stallions, and keep the mares that result from this…”

At the dawn of the 21 st century, Christie Metz of Silver Maple Farm believes this advice is as vital as ever, for she is passionate in her belief that mares are the true foundation of any successful breeding program.  “In the history of the Arabian horse,” she states, “most of what is written consistently concerns the mares, their lineage, and their important traits.  In today’s world the reverse is true – stallions are the most revered.”  Christie has pondered this reversal in trends and believes that the emphasis on stallions is largely because they often generate a cash flow that breeders and show barns must utilize.  Yet in the United States , for example, the number of mares for breeding per stallion is declining yearly, and many of the stallions that win in the show ring seem unable to produce consistent traits in their offspring.

“In my opinion,” Christie reflects, “it is still true that for a stallion to be a great breeding horse he must have a great dam and come from a great dam line.” Both Henry and Christie Metz are proud of their record of allowing very few colts from their program to remain stallions. “Since our first foal was born in 1991,” she explains, “only six colts have been left as stallions, with two of these retained for our own breeding program.  Of the others, two have remained in the U.S. and two have been exported – one to Europe and the other to the Middle East .”

Christie Metz has also been thorough in her study of successful breeding farms around the world.  “Many of the best programs, both past and present, were founded on mares,” she reflects, “and then moved forward by choosing the correct stallions according to each of the mares’ requirements.”  She speaks of several breeding programs she greatly admires which were based on such great mares:  *Estopa of Om El Arab; *ABHA Hamir of SES Planes; Saki of the Jack Tone Ranch; *Ansata Bint Bukra of Ansata; RDM Maar Hala of Rancho Bulakenyo; and Ansata Justina for DeShazer Arabians.  Christie also finds it interesting that many of the great stallions produced in recent history hail from these same mare lines.  “It makes no difference whether the farms are breeding straight Egyptian, pure Polish, or whatever type of Arabian,” she states, “it just seems to be a universal reality that success depends on the mares.”

At Silver Maple Farm the mares have always come first, and the breeding program itself was established with the purchase of just two mares – Glorietasayonaara (Ansata Abu Nazeer x Glorieta Shahlima by *Ansata Ibn Halima) and Isah (El Hilal x Shar Mai Gai Lisa by Azraff).  “The knowledge I now have, of course, in no way went into my decision when purchasing our first mares,” says Christie.  Yet fate ensured that the initial acquisitions for the farm were wise ones indeed.  Gazing upon the lovely Glorietasayonaara, for example, it is obvious that Christie had an eye for quality, beauty, and harmony from the very beginning.  It is also obvious that from this strong foundation, good things have followed, as evidenced by three generations of beautiful mares from this line residing at the farm.  Two of Glorietasayonaara’s daughters, Sahbine, by Ruminaja Ali, and Samura, by Anaza El Farid, are important mares in the Silver Maple program.  Demonstrating the strength of this foundation into the third generation is the exquisite young mare Shaboura, by PVA Kariim out of Sahbine, whose femininity and charisma hold great promise for both the show ring and as a future broodmare of merit.  Another promising young filly hailing from this same family and also reflecting three generations of Silver Maple breeding is Bint Bint Sayo, whose sire, Ali Saroukh, and dam, Samura, are both out of Glorietasayonaara.

All who breed Arabian horses understand that great joy is often tempered with sorrow while pursuing their passion, and sadly Silver Maple lost one of its matriarchs in 2003.  Founder of an important female line of the breeding program, Hi-Fashion Hitesa was a lovely bay daughter of the famed El Hilal (*Ansata Ibn Halima x *Bint Nefisaa).  Linebred to *Ansata Ibn Halima and tracing in tail female to the Bint Riyala branch of the Koheilah Rodaniyah strain, “Tesa” lives on at Silver Maple through her daughters, HF Tesa Reekh by Ibn El Mareekh, a bay reflection of her dam, and Tranquility Moon, a charming grey daughter of Ali Saroukh.

Steadfast in the pursuit of excellence, Silver Maple has carefully added additional mares to their program over time.  “We cherish our mare lines,” Christie states, “and some of our straight Egyptian female lines are quite rare with very few progeny worldwide.”  An exciting young mare for the program is Ansata Haalah, a shimmering white daughter of Ansata Iemhotep out of Hasbah, a daughter of the important German sire, Messaoud.  The tail female line of Haalah’s pedigree descends from the famous Gleannloch Farms, yet another breeding establishment founded on great mares.  “Haalah” traces in tail female to their imported chestnut mare *Nihal (Antar x Neamat) who was not only a champion at halter, but a United States National Champion in Western Pleasure and Top Ten in English Pleasure.  Ansata Haalah represents the Hadbah Enzahiyah strain at Silver Maple, through Bint Samiha, the dam of Nazeer.

Jade Lotus SMF traces in tail female to another well-known El Hilal daughter, the beautiful Moon Mystique.  In turn, Moon Mystique is a granddaughter of one of the most famous of Gleannloch Farms’ foundation mares, *Bint Maisa El Saghira, the dam of the well-known stallions Shaikh Al Badi and Amaal, and also a famous show mare with U.S. Top Ten honors in both halter and performance.  The pedigree of Jade Lotus reflects a multitude of outstanding mare lines, all from the heralded programs of Ansata and Gleannloch, including some of the most famous mares ever to leave Egypt:  *Ansata Bint Zaafarana, *Ansata Bint Mabrouka, *Ansata Bint Bukra, *Magidaa, *Bint Maisa El Saghira, *Romanaa II, and *Bint Nefisaa.   In tail female, Jade Lotus is Dahmah Shahwaniyah, from the Durra family.

“We also feature mares that are a combination of Egyptian crosses,” explains Christie, “and one of our most successful mares is the beautiful Shaia, Canadian Reserve National Champion Mare, and twice U.S. Top Ten Mare.”   Shaia is a superb example of the famous “Golden Cross” of Egyptian and Spanish lines, as her sire is Silver Maple’s own World, U.S., and Canadian National Champion Stallion *Simeon Shai, and her dam is the wonderful Spanish mare, Bint Zlabiya, a daughter of *Barich de Washoe.   “When we purchased *Shaia from Bruce Clark and Gerry Alexander of BruMarBa Arabians,” says Christie, “it was always with the intent to breed her to Egyptian stallions.”  Shaia has been an outstanding cross with the Silver Maple stallion BB Thee Renegade and is in foal for the fourth time to him.  Probably the most famous result of this cross is the exquisite black stallion, Dreamcatcher SMF, now proudly owned by Sigi and Jay Constanti of Om El Arab and demonstrating the strength and quality of his pedigree by producing exceptional foals for their world-renowned breeding program.

A beautiful example of the Egyptian-cross mares of Silver Maple Farm is the exquisite Om El Exotica, sired by Sanadik El Shaklan out of Om El Bint Shaina.  Her pedigree represents the careful blending of Egyptian and Spanish blood that has been the hallmark of Om El Arab.  Om El Exotica boasts three crosses to the illustrious *Estopa, two through her famous son, *El Shaklan, and one through her daughter Om El Shaina by *Camargue.

Exciting times are ahead for Silver Maple Farm as they move into the fourth generation of their breeding program, and Christie notes that their philosophy continues to embrace linebreeding to strengthen certain characteristics, then carefully outcrossing, with foremost attention to the dam lines.  She is also quick to point out that despite her affinity for the distaff side, the stallions of Silver Maple are much beloved and appreciated, with her husband Henry providing the balance which makes their farm a true shared endeavor.  “Henry was immediately drawn to the stallions,” Christie says of their first experiences with Arabian horses, “where I was just the opposite – in love with the mares.”

As the dawn rises over the Santa Ynez mountains and warm sunlight fills the valley, Christie Metz enjoys walking among her mares, speaking to each in turn, and touching them with love and affection.  The generosity and kindness of both Henry and Christie Metz, as well as their dedication to the Arabian horse, seem to be reflected in the   ancient manuscript of Ali Ibn Abdulrahman Al Andalusi.  Within its pages, there is a special reference to the eternal rewards resulting from a heartfelt devotion to Arabian mares.  For the advice of the Prophet Muhammad (pbuh) regarding the breeding of horses has a profound conclusion:

“Keep [the mares]…and breed them to stallions, and keep the mares that result from this, and you shall rise to the highest levels of heaven.”