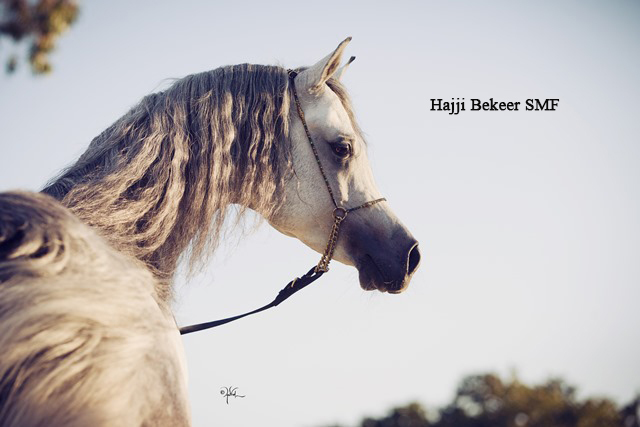 Of the dappled grey the Arabs say, "If he is like the stones in a river, he will refill the camp when it becomes empty, and he will save us in combat on the day when the firearms clash."

Hajji is a wonderful youngster that is a very complete stallion, everything is solid and very correct. You see more of his sire in him than his dam but all those traits are a bit more masculine even than Noble's. He will be the horse that can do sport horse, western or working cow horse, athleticism personified. Interestingly, we  bred him to Dance Diva who also carries Antigua Dance in her pedigree and this makes him pure in his family strain of Hadban Enzahi.  He would make a superior herd sire for anyone looking for an athletic stallion with looks.

This colt's name is a take-off on the story of a Turkish Aga, Haji Bekir. It is also the name of a favorite confectionary store in Egypt that sells delightful and tasty Turkish sweet treats. Powerful, yet sweet, is a perfect desciption of this colts' character. Henry and I believe many stories will result from Hajji because he is so very special.

Movement, tail carriage and charisma are combined with large dark eyes on a head that is chiseled with a tiny muzzle and sharp, high set ears topping a beautifully arched neck. Hajji has almost totally black skin with only a tiny bit of a white star that is seen in his foal photos. Because we have two Noble sons, Henry and I are willing to part with one of them. However, our plans for 2014 include Hajji Bekeer SMF in the stallion roster as a 1st year Junior Stallion.

His pedigree is a superior one; filled with champions and providing the Hadbah mare families of  Bint Samiha (3 times) and one time Yosreia through Messaoud's dam, Maysoonah.The Abbeyan Om Jourays El Shahbaa family travels through  Magidaa (3 times). Then there is the three Dahmah Shahwaniah branches represented by Bint Bint Sabbah, Farida and Bukra. Two Saqlawiah families, one line to Yemama and the other to the dam of Sameh through *Sultaan's dam, Lubna. A powerhouse pedigree that is clearly seen in the individual, a stallion that will bring the treasured genes of the past into the future beautifully.

Hajji is ready in 2014 to begin his breeding career and has been tested for CA, SCID and LFS and is clear for all. His semen is exceptional and that is a bonus as any breeder knows!!