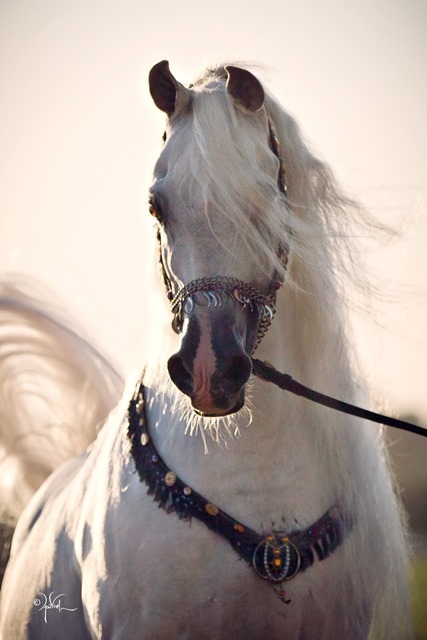 Of the white horse the Arabs say: “This is the mount of kings, because he brings good fortune and luck…Take the white like a silk flag, with a ring of black skin around his eyes.”

As Silver Maple Farm winds down in order to close its doors as a business in 2016 other breeders have been able to benefit from the long term breeding program. One such couple, Leann and Mike Fitzpatrick, of Imtal Straight Egyptian Arabians in Iron, MN. have taken the opportunity to incorporate  the incredible SMF bloodlines into thier herd is Imatal Straight Egyptian Arabians owned by Mike and Leann Fitpatrick of Iron, Minnesota. Leann and Mike are a power couple that does it all;  jobs outside the Arabian horse industry and yet they manage every aspect of their own breeding program. Mike has found new skillsets that allow him to build stalls, fence and use a tractor! Leann introduced him to Arabians and it would be safe to say "Duck to water" or in this case "Desert creastures capture Winter Wonderland Lad"! Leann has always loved horses, especially Arabians; so this is a dream come true. Silver Maple Farm is so very pelased that they will now be the caretakers of Majestic Noble SMF, they will be great stewards that use him well. I wish them the absolute best. As difficult as it is to say goodbye to Noble it helps to know that he will be loved and have a new harem too.

2016 update by Christie Metz
I realized recently that I have not updated for two years! So, I began thinking about just why that might be?! Really, this is because Noble is so very consistent as a sire. He is a stallion that you are absolutely able to count on for adding the fine details to his foals. This is a rare and wonderful trait to utilize for a breeder. If you need a finer muzzle, bigger eyes, tiny ears, huge jowl, longer legs, a finer hair coat and pride, then Noble s your stallion! It doesn't seem to matter what mare line he is bred to this is consistent, the desired word when breeding horses. It is hard to believe he is 16 years old now but he looks like a young horse. So proud of what he has done in the breeding shed and to have such a horse on our farm that we bred is simply the best feeling ever.

This foal crop may be our best one yet! We adore the Noble colt out of Bint BInt Sayo and have named him Sheikh Sami SMF . He is truly a magical creature and has an amzing character already, in fact it showed the minute he was born. To top it off BB Sayo is a fantastic mother to her foals and this colt she was greeting before he was even out. He has all the prescence one could desire in a colt and he is ultra refined, tall, elegant with huge black eyes. Keep a watch on this boy.
Majestic Noble's daughters are also beginning to produce and what they are producng is wonderful!

Once again, Henry and I have bred mares to Noble with the hope of securing daughters in order to add them back into the SMF breeding program; fortunately this year we had Noor El Nil SMF and Malak SMF that will join their paternal sisters, Mouneera SMF and Nuwwarrah SMF from the 2012 foal crop. We also have two sons of Nobles' that we love. The first is Symbolic SMF and the second is Hajji Bekeer SMF an upcoming Junior Stallion for SMF. This sire gives both stallion quality colts as well as stellar fillies. Nuwwarrah SMF, a coming three year old traces to the Bukra Family in her female line, Mouneera a coming two year old traces to the Bint Halima family along with her full sister, Malak. Nil El Noor who traces to the Bint Bint Sabbah family through Ansata Nile Queen. All of them are Dahmah Shahwaniah in strain tracing to the root mare El Dahma. A son of Noble, Symbolic SMF a 2006 grey stallion is now taking his place in the breeding continuum at the farm. His dam was the ethereally beautiful mare, Shaboura (PVA Kariim x Sahbine by Ruminaja Ali) bred by SMF. He is Dahman Shahwan in strain through Bint Bint Sabbah via the Ansata Sabiha family. The other upcoming son is Hajji Bekeer SMF, a very exciting coming three year old out of the mare Haalani SMF (Ali Saroukh x Ansata Haalah by Ansata Iemhotep). His family is Hadban Enzahi and Hajji will begin his breeding career in 2014. Henry and I see very clearly that there is a consistency of type, a passing of beautiful physical traits by Noble, always a goal with a breeding stallion. Being able to count on these valuable traits that add to type is of a huge value to us as well as other breeders. Noble works very well when bred to the Ali Saroukh daughters and because he is intensely linebred as an outcross to our Ansata  mares. To date, we have sold almost every foal that he has produced whether a female or a male. It is our experience that discerning buyers and breeders recognize the overall high quality of his foals and want to add these traits to their own breeding programs. One filly was sold at two weeks of age when the owner fell in love with her, buying her on the spot because she spoke to his heart! A breeder may count on Noble to produce large dark eyes with good width of forehead, added length of leg, tiny ears, and a large defined jowl ending in a teacup muzzle, along with loads of charisma. However, even with high spirits, the foals are very easy to be around, they have nice personalities plus a willing attitude for learning.Our plan is to use Majestic Noble SMF daughters in the future with Simeon Shai or Saroukh and their sons, the junior stallions, Sidon SMF and Jasoor SMF. To date, Nobles’ foals are all over the world and only two females remain here in the United States that are of a breeding age. Noble is by the Kehilan Arabians' stallion, Marquis 1 (Makhsous x Antigua Dance by Ruminaja Bahjat) bred by Janice Bush of Somerset. The immortal and national champion producing Makhsous is by Sakr out of the mare Enayat by Morafic. This combination brings a prepotency of the great sire, Sameh through the sires’ side of the pedigree. This has proven to be a very complimentary outcross to the Nazeer sire lines reflected in the SMF horses. Majestic Nobles’ dam Nagda is the only Bint Magidaa daughter by the stallion Nabiel representing intensely the sire line cross of Sameh and Nazeer. She is an exceptionally beautiful mare that has proved herself as a producer of superior males and females, just as her dam Magidaa proved. Bint Magidaa’ s sons, Sterling Vision by Imperial Imdal, Nadgy by Pharres and Montaser Al Nakeeb by NK Hafid Jamil have gone on to become superior stallions as well. This is a rare and important trait ,.. the production of both good colts and fillies. It seems to run true into the next generation as seen in the foals that he has sired in the last two years. It ensures greatness for future generations.