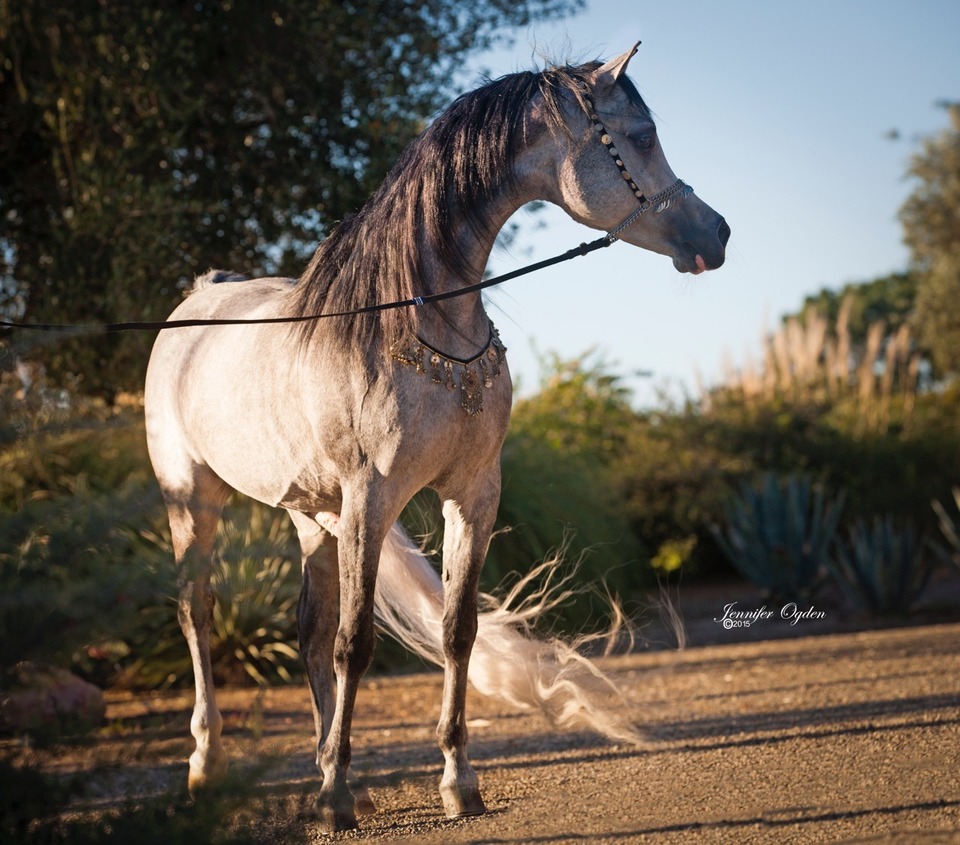 “The Horse is God's gift to mankind.”  ~ Arabian Proverb

Jasoor had his first foal, a colt this year out of the mare Jada SMF (Majestic Noble SMF x Jade Lotus SMF by Ali Saroukh) . Jada's owners, Athala KIng and Maureen McCormack of Athala Arabians leased her to us for this foal. He is everythig we want and in the tradition of this family he will be named with a "J" name, this time Jabril SMF. He is upright and very exotic and of course grey sice his dam is homozygous for the grey color gene just like his grandsire, Majestic Noble SMF and grand dam Jade Lotus SMF. However, Jasoor has sired severl bays like his sire, Simeon Shai for clients and happily we report they are all fillies! Right now he is bieng trained under saddle and is enjoying the work so much....every horse needs a job in order to have a bright personality and keep them happy.

The excitement for 2015 was taking Jasoor to the Egyptian Event in Lexington, KY. in June. As usual this young stallion took everything in stride. He enjoyed very much being shown by Trevor Miller in the Amateur stallions 6-7 year olds and was Reserve Champion. This is an extraordinery horse in his athleticsim and his wonderful mind. Goals for the future are for him to get under saddle and become a Sport Horse. He has four foals expected for 2016 and one will be born in the KIngdom of Saudi Arabia! We are expecting a foal out of his maternal sister Jada SMF and are so excited, doubling the Shai and the Jade Lotus SMF this should be an amazing foal.

Jasoor SMF (his name means, bold, courageous or brave). Truly, we named this young stallion well because he is bold, taking everything in stride and handling each situation wisely. He just seems to understand how to cope and never gets over excited about things around him or people. However, I have to say this IS very like both his dam and sire; their personalities and heart are huge.  At the farm, we typically begin a young stallions’ breeding career when he reaches four and rarely before because they are not mentally or physically mature enough to handle their job. After their second breeding year they earn the designation of Senior Stallion because they now have experience becoming seasoned in their job. Jasoor is one of the few straight Egyptian stallions that began his breeding career as a three year old. He was physically and mentally mature enough last year, in 2012. True to his nature, he learned the process in about fifteen minutes!

Jasoor is a joy to be with and has a kind nature, is smart and quite athletic. Beautiful and correct conformation with large dark eyes that just seem to tell you they “know”, pointy small ears, a short dished head with large jowls ending in a small muzzle. His overall conformation is solid.  When being body or face clipped Jasoor is not tied up; he is so patient. Yet, when asked to present himself for a crowd he is definitely ready, moving with bold, floating strides and a high set tail carried like a flag! His neck beautifully arched with ears and eyes focused ahead, he does enjoy a crowd of admirers!

The Sire’s side of the pedigree: *Simeon Shai + (Ra'adin Royal Star x Simeon Safanad by Sankt George), is the late, great straight Egyptian Arabian stallion, one of the breeds most deocrated stallions and a breed record holder. Shai+ is the only Arabian stallion to have achieved his titles under seventeen different judges over the short period of ten months. He holds the titles of Scottsdale Champion Stallion, Canadian National Champion Stallion, U.S. National Champion Stallion and World Champion Stallion at the Salon du Cheval. He is also a high percentage of Babson bloodlines. In addition, he has some of the most famous bloodlines of the famous Hungarian State Stud called Babolgna through Simeon Safanad.

Jasoor SMF is out of the Silver Maple bred mare, Jade Lotus SMF. She is a daughter of Ali Saroukh, a son of Ruminaja Ali, and out of the mare Imdals Jade by Imperial Imdal.  Jade Lotus is an Egyptian Event Supreme Reserve Champion mare, but most important to us is that she has been a wonderful producer for the Silver Maple Farm breeding program.

Jasoor SMF is included in the Silver Maple Farm’s “Custom Stallion Services” program, a unique stallion service promotion that encourages breeders to utilize the services of the straight Egyptian stallions standing at our farm. We invite you to inquire about this special program.