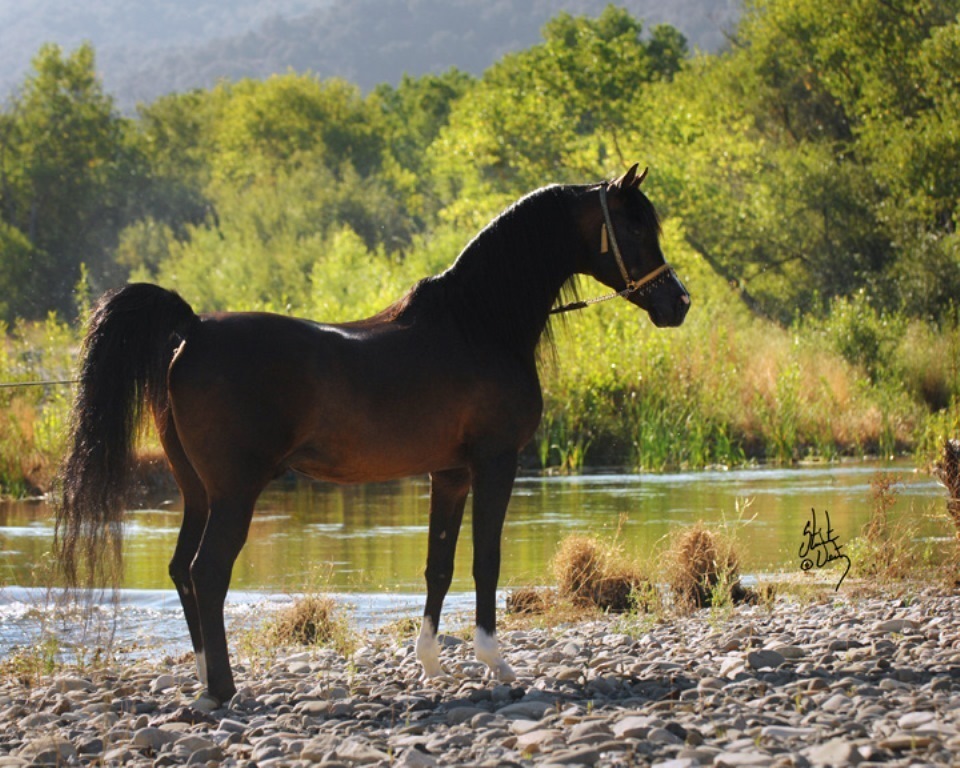 “And many a day like the night of lovers I have ridden through, watching the sun when it should set, my eyes fixed on the ears of a bright-blazed horse which was as if a star of the night remained between its eyes…” The Arab Poet Al Mutannabi

In 1991, I saw *Simeon Shai+ for the very first time during the All Arabian Show in Scottsdale, Arizona. Henry and I had made the decision to begin breeding these fabulous and magical Arabian horses so, I was attending the show in order to “learn” more about them and the industry. Of course, I knew next to nothing but I did recognize “a super star” when I saw *Shai+.

For me, it was an unforgettable moment when he entered the show ring. *Shai+ carried his tail like a fountain of ebony silk, his coat gleamed in the sunshine and at times, he seemed to dance in place. So perfect was his outline as he posed in center ring for the judges that he appeared as a dark bronze sculpture. I did not have much experience with Arabian horses at this time yet I clearly understood the pride in his carriage and that he truly enjoyed showing. He was always an absolute ham with a crowd of admirers; he would get very big when he saw people waiting to see him, it seemed as if he grew six inches taller!

When he left the show ring that day in 1991, I followed him back to his stall at Vantage Point Farm to talk with trainer and co-owner, Ron Palelek. There, I booked our first straight Egyptian mare, Glorietasayonaara (Ansata Abu Nazeer x Glorieta Shahlima by Ansata Shah Zaman) to *Shai+ for the 1991 breeding season, even before asking Henry! Impressions that come to you like the one Shai+ made on me that day stay with you forever; they reside in your heart; I know there is a permanent etching of *Shai+ on my heart.

Life has many serendipitous moments and one of those moments happened when we eventually came to have *Shai+ reside at our farm,..ten years later. Who would have thought that a purchase of a breeding could lead to this famous stallion standing with us at SMF. He arrived at the farm in Naples, Florida at the age of seventeen in 2001. *Shai+ then moved with us to California in 2003. We have learned by living with *Shai+ what exactly it means to be around a legend and just how the treasure and measure of this stallion is defined. He is so much more than an International show ring champion. Henry and I saw firsthand on a daily basis those characteristics that *Shai+ passed forward to his foals, very special physical and personality traits. His foals all seem to have a harmony and balance of structure, exotic beauty paired with athleticism. One of the many positives is that they also seem to inherit the wise mind of their sire.

*Shai+ has accomplished wonderful successes in the show ring, winning the United States and Canadian National Championships, Scottsdale Supreme Champion Stallion and World Champion Stallion at the Salon De Cheval in Paris, France in 1991 and under 17 different judges. All of those accomplishments happened within a ten-month span of time, an unequalled feat, even today. His kindness shone out of his eyes and even though he enjoyed the adulation of a crowd, he was never aloof. He was always happy to meet and greet humans. The straight Egyptian Arabian stallion *Simeon Shai+ from the land “Down Under” lived at Silver Maple Farm for the last twelve years  of his life and the impact he had on our lives is immeasurable, he was a blessing in our lives.

In 2004, Henry and I registered *Shai+ in the name of Silver Maple Farm, as full owners but truth be told, he really owned us. Physically *Shai+ never seemed to change from when I first saw him in 1991 except that he became even more beautiful in my eyes. In 2007, Stuart Vesty photographed him and in all honesty, I think Stuart wondered if we were bringing a decrepit old stallion down to the Santa Ynez River to take a photo; imagine his surprise! Those white hairs on Shai’s face sometimes made me tear up when I realized he was truly twenty-eight years old even though he rarely acted his age.

This stallion enriched our lives in so many ways and especially through the people that came into our lives because of him. His breeder, Marion Richmond of Simeon Stud in Sidney Australia monitored her “four-legged son” as did Gerry Alexander and Bruce Clark of BruMarBa Arabian Stud fame and of course Ron Palelek of Vantage Point Farm. They all checked in on him regularly. These three men originally brought *Shai+ to the USA when they formed the *Simeon Shai+ Alliance, promoting him to International Champion. Additionally, there are the many, many people who have bred to Shai throughout all the years. Henry and I never tire of hearing about their foals, especially how much they love and enjoy them. So many of his progeny went forward in all areas of performance and had amazingly long show ring careers. There are also the trainers and grooms whom experienced Shai progeny, they would often say to us “Send all the *Shai+ ones to me please”!

On Arabian Horse Data Source it lists *Shai+ as having 471 first generation foals, with an almost even split between colts and fillies. It does not include those born in other countries or with frozen semen overseas. The second-generation progeny listing is for 1,271 horses to date. *Shai+ earned the points to become a “Legion of Honor” stallion within the Arabian Horse Association and many of his progeny have gone on to earn even more awards over very long show careers, a hallmark of correct conformation and minds. To add to those honors, the Arabian Horse World magazine recognized *Simeon Shaia+ as a “Sire of Significance”. This was to honor his contribution as a sire of champions on five continents and in over ten countries. Henry Metz won our first National USA Championship trophy for Silver Maple Farm leading a *Simeon Shai+ great granddaughter, Om El Shadream+ (Dreamcatcher SMF (BB Thee Renegade x Shaia+ by *Simeon Shai+) x Om El Shadina by Sanadik El Shaklan) and these champions continue onward in each generation.

On October 4, 2008, SMF threw a birthday party for *Shai+ at Silver Maple Farm; over 100 people came to help celebrate this fine stallion’s life and his legacy. During the party, we presented seventeen horses that were direct progeny, grand get or great grand get under saddle, loose and in-hand to the appreciation of the crowd. It was amazing for us to realize his influence on our breeding program over the last twenty plus years. We overheard one male guest comment, “I wonder if this many people would show up for my birthday”. During a luncheon, we toasted Shai and afterwards he closed the day by being at liberty for his enjoyment and ours.

The last birthday party was in August 2012 to celebrate his 28th year. Sandee Andrews and her mother, Diane McClure Willis brought their very specially decorated cupcakes for him, featuring a small bay marzipan horse sitting upon green grass frosting. *Shai+ enjoyed these treats so very much; the green frosting bearing witness to his love of sweets. Looking back, we believe he stood so patiently for photos afterwards because of a sugar stupor after eating so much. Typically Shai became quite bored with photos very quickly and would not pose for long; he had more important things to do! Part of me likes to believe he may have known it was the last time for this opportunity and wanted to enjoy it for as long as possible.

Often over the last five years when *Shai+ was given recognition during the annual April California Breeders Celebration in the Santa Ynez Valley he took this as his due, almost bowing as he circled the ring. He was always the last stallion presented because he was and will remain the “King”.