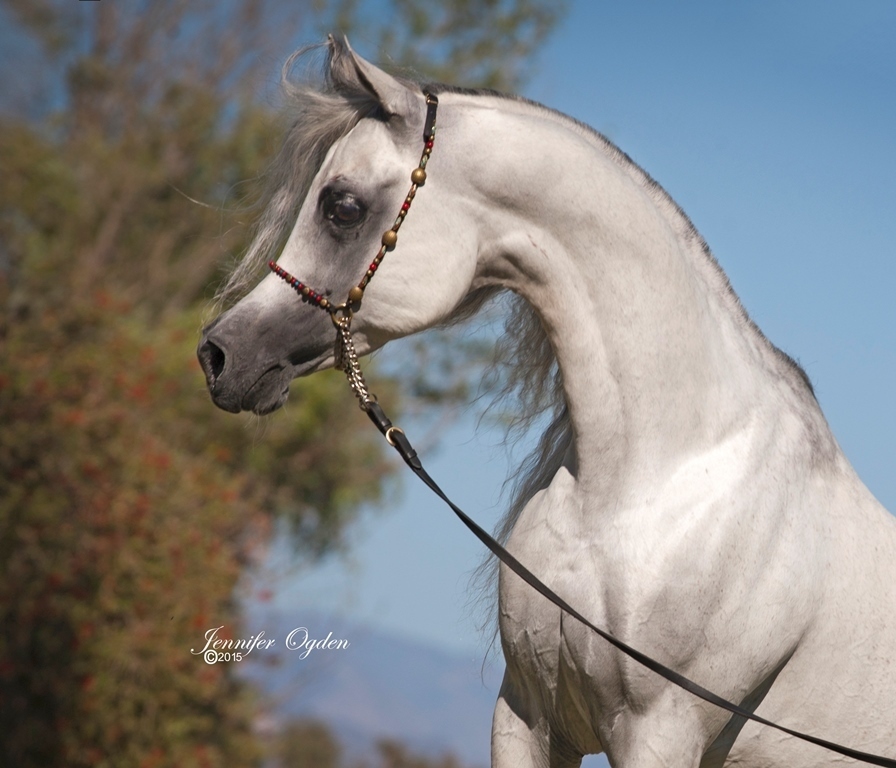 “Proudly he arches his neck, with tail carried high. He signals the continuum, regally passed through the ages…..” Wide eyes shine in the sunlight look closely, the desert sand visible in his eyes swirls in the wind…

Every year we are more in awe of Symbolic as a sire of amazing quality foals; He is truly the "King of Details".  Henry and I agree that he brings so many important details to any breeding equation and always adds quality and type. If you want big eyes, a super arch to a neck, clean throat, close set ears that are finely turned and thin, use this stallion. He adds lots of leg and an attitude for the show ring, colts or fillies. Rrepresenting the third generation of our SMF breeding and it is a great feeling to see your plans work out. He exhibit the traits within the horses that you wanted to bring forward. Truly it is a dream to see our vision come to life.

This year we realize how truly fortunate we are to have bred a stallion such as Symbolic, his progeny are outstanding. He is so predictable for what he will add and this is a huge bonus for any breeder! He is sire for adding important details to any mare line without taking away from their beauty or overriding them. Huge eyes, finely turned ears set closely, length of leg, arch to the neck, a true palm frond shape. Add expression, check, add attitude, check, add dark pigment, check, add length of croup, check! The foals come in all colors too!! More fillies than colts and this is good too! Its all good with Symbolic the detail King.

Henry and I continue to be amazed by this stallion and what he is producing and he did not disappoint again this year. He produced a chestnut colt named Shahin El Nil SMF out of Ansata Nile Starlight that is nicknamed "Hotrod" . Shahi is the first colt produced by Symbolic and it seems that like his sire he is breeding both good colts and fillies. This is quite the feat for a stallion. His filly this year is again out of the Ali Saroukh daughter, Haalani SMF but grey in color this time and named Hadeel SMF. For 2015 we have bred him to four SMF mares!

Henry and I are proudly using this young stallion in our SMF breeding program now. We believe and have faith that he "IS" the “next step forward’. Symbolic is taking the next generation to a new and even higher level of quality; this is a breeders dream. In alomost twenty five years of breeding straight Egyptian Arabians, one of our deciding factors for a colt to become a stallion is if Henry and I would use them with our mare families. We have to believe they will enhance the SMF breeding program.

Very few colts achieve breeding stallion status at SMF because we are so particular. Since our program is small in terms of number of horses, it is essential that we focus on an extremely high quality of stallion and mare so those resulting foals will be an even better reflection of their sire and dam. Keeping an eye to the future means that we must always move forward in each succeeding generation, improving each time.  Henry and I see ourselves as “Focused” breeders. By this, I mean that we choose to produce superior horses that are of the highest quality while using fewer horses. Our goal is to breed for the best of the best in quality, not numbers. We enjoy being hands on with our horses and knowing them personally and you cannot do this with large numbers of horses.

Symbolic is a combination of two homebred horses, we bred his parents and some of their parents as well. The female line is our foundation mare family from Glorietasayonaara.

We bred his dam Shaboura and she is out of Sahbine, the only full sister to Ali Saroukh. Sahbine (Ruminaja Ali x Glorietasayonaara by Ansata Abu Nazeer). Shaboura was sired by the stallion PVA Kariim. Without a doubt, in our opinion she was one of the most ethereally beautiful mares anywhere in the world. Henry and I are so very proud to have bred this mare. Shaboura entertained and delighted us for over fourteen years before she left us. We are grateful to have  two of her sons at SMF to bring forward some of our favorite stallion lines while maintaining the foundation mare family prominently as well. her only daughter now lives in Qatar.

Her pedigree is a beautiful weaving of  many great straight Egyptian horses. Shaboura’s sire, PVA Kariim, was truly a magical stallion, sired by the National Champion stallion Imperial Imdal (Ansata Imperial x Dalia a *Morafic daughter out of *Romaana). His dam was the mare, BKA Rakiisah (The Egyptian Prince x AK Radia by Ibn Moniet El Nefous), making her pure in the strain Saqlawiah since both sire and dam are considered from this family. The pedigree is also woven with heavy Saqlawi and Dahman families that are very complimentary to one another for phenotype as one is tall, linear and the other rounder.

Symbolic’s sire, Majestic Noble SMF (Marquis 1 x Nagda by Nabiel) is the silver white stallion you read about in fairy tales, equally as ethereal as Shaboura and yet masculine. He brings the additional and intense Abayyan Om Jourays family to the weaving of this pedigree through Bint Magidaa and her daughter Nagda by Nabiel. It was the only time this mating was ever done. Both Magidaa’s daughter, Bint Magidaa (Khofo x Magidaa)  and her equally famous son, Nabiel (Sakr x Magidaa), created dynasties of breeding horses that are superior in type. They always breed onward while maintaining quality and type. Noble has the Magidaa mare line three times in his pedigree.

On his sire’s side of the pedigree is the stallion Marquis 1 (Makhsous x Antigua Dance by Ruminaja Bahjat, a Bint Magidaa son). Again, here is the mare Magidaa combined with the addition of the prepotent sire line of Sameh (El Moez x Sameera) a compliment to the otherwise heavy Nazeer influence. Sameh is sometimes considered Kuhaylan in family or Saqalawi, either family is just fine with us!!

Also, the strong presence of *Hoda (on the female side of the pedigree) as a representative of the Hadbah Enzahiya strain through the Bint Shams family branch is a major bonus. *Hoda was imported from the EAO by Mr. Kline and then bred to the Zaafarana son, Talal by Nazeer producing Talya who when bred to Ansata Shah Zaman, another Saqlawi strain stallion produced Talyla. Talyla bred to Ruminaja Bahjat produced Antigua Dance (Hadbah Enzahiya), the dam of Marquis 1, Noble’s sire and Symbolic’s grandsire.

Symbolic gave us two fillies in 2012 one is out of the Ali Saroukh daughter, Bint Bint Sayo whose dam is Samura (Anaza El Farid x Glorietasayonaara by Ansata Abu Nazeer x Glorieta Shahlima by Ansata Shah Zaman), and the fourth generation of the Glorietasayonaara family at SMF. Her name is Sheikha Sara SMF, a grey filly of the Dahmah Shahwaniah family. The second filly we named Hasna SMF (out of Haalani SMF (Ali Saroukh x Ansata Haalah by Ansata Iemhotep) and Hadbah Enzahiya in family but from the Maysouna branch and she is bay in color. We now know that Symbolic sires color even though his sire is homozygous grey. The third filly, born this year is a full sister to Hasna, named Al Bouraq Haana SMF. She is now proudly owned by Al Bouraq Stud of Morocco.

Symbolic SMF is included in the Silver Maple Farm’s “Custom Stallion Service Program”, our unique stallion service promotion that encourages breeders to utilize the services of the straight Egyptian stallions standing at our farm. We invite you to inquire about this special program.